skip to main | skip to sidebar

I am now officially a permanent resident of HK; and while for some of the thousands upon thousands of others who are granted residency by the Immigration Department on a daily basis, this is nothing but a bureaucratic practice, to me it's bigger than that. It's a personal victory. A story of hope. A test of strength.

I left Manila to work for HK Disneyland in 2005 knowing for certain that I'd be back after the 18-month gig with enough savings to be able live more comfortably than when I had left. Six months into the contract, I felt the pang of homesickness and artistic ennui. My then romantic relationship was getting more difficult to maintain because of the long distance, my mom was getting sick more often, and I missed being a "proper artist". I cried myself to sleep every night, wondering how much longer I could soldier on. I was ready to quit. I wrote to some of the most important people in my life, and they were all unanimous in saying that I just had to suck it up and it was going to be over swiftly. Three of those messages hit hard and kept me going. First was from Myra Beltran, who said, "A hungry artist is an unhappy artist." Second was from Denisa Reyes who said that she knew me as a strong, persevering person, and that it would kill her to see that she was wrong. And third, and most important, was from Tita Chit who reminded me that my beloved cousins needed my help. I had to stay. For me and for the people who believed in me.

Fast forward to 2009-- the point of no return. It was when I had to make that life-altering choice: to stay or to go back home. Clearly, I chose to stay. And the remaining three years that led to today just flew by just like that.

Although there are still things about this city that get to my nerves like the humidity, the rainy summers,  the inability of some people to say "Excuse me" and "Sorry", the cranky taxi drivers, the great divide between the locals and the expats, et cetera et cetera, I DO love this city. I love it for its dynamic energy, for the many opportunities that it has in store for anyone who is willing to try, the efficient public transport, the beautiful skyline, the close proximity of the mountains and beaches to the city, the friendly civil servants, the not-so-disheartening tax, the wide roads, the healthcare service, the food, the Star Ferry. 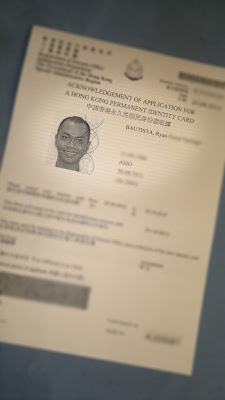 I once asked myself, "Is home where one left his heart in or where he established a life in?" I still don't know the answer to that. I don't think I still care to know. Manila still is-- and will always be-- the bearer of my heart. But Hong Kong is the cradle of my life. And now it's legal and official.

Thank you, Hongkash! When is the next round of HK$6000 handouts?

this space is for your messages, short and sweet. feel free to drop me a line!